The Birth of the Kauai Children’s Authors Guild 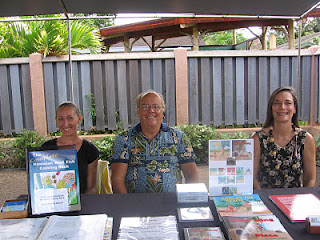 As a newly published Kauai author, Monika Mira was feeling good about the success of her book, but she also felt somewhat unsure of new world of publishing. Shortly after her new title, The Complete Hawaiian Reef Fish Coloring Book was launched, she began to contact local authors for support. What she discovered was an amazing community of people that were willing to share their stories, challenges and successes and offer her a hand. Mira found that children’s authors not only cared about children, they cared about each other. They were simply good people with a lot to give.
Mira also found that every time she connected with another author, something good happened, not every time for her, but something good in general. Upon contacting Judi Riley, author of When I am Quiet on Maui, she landed local distribution and she gained a friend. Upon contacting prolific author Kathryn Orr of Honolulu, both authors were invited to appear on the KGMB morning show. Other authors then began to contact Mira for help and advice and the whole thing just sort of snowballed.
In the mean time, the economy began to suffer and two major events would change the landscape of the publishing industry for good. The first was the loss of Borders. Borders had been friendly to local authors serving both as a place to sell their books as well as a place to hold events like book signings. When Borders folded, not only did local authors lose a storefront, but many independently published authors actually lost their inventory as the store filed for bankruptcy. In turn, the bankruptcy of Borders also affected the local distributors and how they do business with the publishers, making it even harder for both authors and publishers.
The second major event to change the world of publishing is the fairly sudden shift away from print books to ebooks, apps and read-aloud books available for tablets, phones and other electronic devices. The number of ebooks being sold versus print books is astounding and sales are accelerating. While it would seem logical that parents would still want to read bed-time stories to their children from a physical book, many families are actually opting for the digital format. Many parents feel better about allocating their children’s “screen time” to a book app or ebook as opposed to letting them watch mindless TV.
This shift brings major changes to authors, illustrators and publishers as to how they will format their work. It is also forcing them to learn about new technologies that are continuously changing and taking them away from what they do best, creating great children’s books. Since ebooks and book apps are still in their infancy, there is no real standard yet and different devices use different formats. It is quite a learning curve for everyone.
These events prompted Mira to band together the authors that she had befriended and form the Kauai Children’s Authors Guild. She could see this changing landscape, and the need for support, so she decided to do something about it to help herself and the other authors.
“We just feel stronger as a community of authors. We are there to support and motivate each other. We have built new friendships and learned a lot from each other by sharing valuable information. We have also found that it is easier to help promote each other instead of trying to promote ourselves all the time. Why not help someone else if you are given the opportunity? It’s rewarding.”
The Kauai Children’s Authors Guild will be very active interacting with the community in the coming year and Mira hopes that the community on will come to recognize and be acquainted with all of its children’s authors. In order to do this, numerous book signings and events will be held across the island. The authors are already scheduled to hold books signings at Na Aina Kai Gardens, NTBG, Kauai Mini Golf, The Princess Kauiulani Keiki Fest, and Talk Story Bookstore. They are also negotiating events at numerous other locations.
Kauai Children’s Authors Guild members will also available to read their books, interact with children, or in Mira’s case, conduct a coral reef building activity in classrooms and other venues. You can learn more about Kauai’s children’s authors, their books, and their book signing tour dates on the Kauai Children’s Authors Guild blog at http://kauaichildrensauthors.blogspot.com.
For more information, you can contact Monika at the Kauai Children’s Authors Guild at 808-652-5756, or lucidhawaii@mac.com

What's in this blog?